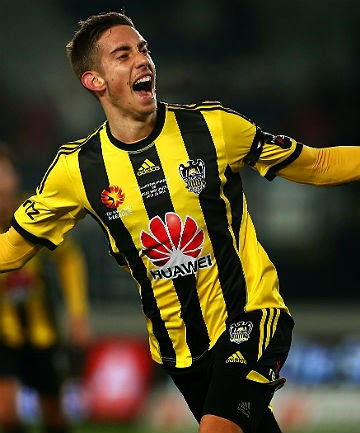 When Newcastle United beat Sydney FC four-nil on Tuesday night, the gulf between the English Premier League and the A-League was there for all to see. So expectations were modest for the Wellington Phoenix when the side took on West Ham United at Eden Park last night.

But it was fairytale stuff for the 'Nix; Stuff reports:

West Ham United have had their Premier League bags sent packing, stunned 2-1 by the Wellington Phoenix in Auckland tonight.
Two goals in the first half-hour of the Eden Park exhibition saw captain Andrew Durante and Alex Rodriguez dispatch excellent finishes to give the Phoenix one of their most iconic victories in the short history of the A-League club - and one which will no doubt be remembered for years to come.
In fact, Wellington Phoenix captain Durante described it as a win for the entire country.
"First and foremost, beating a Premier League side is a huge achievement for this club," Durante said.
"It's great, it was a great feeling. The team are very excited. It was a big occasion for us and a big occasion for New Zealand. We're just glad that we contributed to a pretty good game.
"Credit to West Ham, they put us under the pump, especially toward the end of the game. Ernie spoke to us all week about just enjoying ourselves, not going into our shell and letting the occasion overawe us."
Phoenix coach, Ernie Merrick, said it was important to keep feet planted on the ground and the performance represented a positive step.
"You know me, I'm very careful not to get carried away with something like this," Merrick said.
"Glen Moss pulled off a couple of great saves, it could have gone the other way but there are a lot of good signs. I won't get carried away with it. West Ham were a wee bit unlucky today.
"It was crucial for us to put on a good performance, to win the ball and keep it. Our real strength was a rock-solid backline who were well protected by a bank of midfielders.
"For the boys to perform like that, it was outstanding."
Merrick said the important thing was now for his side to re-focus for Saturday's game against Newcastle United.
"We want to play well there. My concern is getting them to recover for the next one."


In a result which the Phoenix back office might have dreamed of, but would never have seriously considered, Saturday's double-header in Wellington has turned into a genuine series final. The two losers, West Ham United and Sydney FC will play for pride and third place. And the two Round One winners will be playing the main game, and the Phoenix players will have the unparalleled opportunity to claim two EPL scalps in the space of just a few days.

We heard last night from a Wellington friend there are just 4000 tickets left for Saturday's double-header. Unfortunately, we have a couple of commitments we can't break on Saturday, or we would be there. But we reckon those remaining tickets will be snapped up quickly, and the Ring of Fire will be packed to the rafters on Saturday.

The Wellington Phoenix organisation deserves lots of credit for taking a punt and organising the tour by Newcastle and West Ham. Here's hoping the financial results are good enough for them to make it, if not an annual at least a regular event on the footballing calendar. If nothing else, the 'Nix players have shown that the EPL sides venturing down to New Zealand will be given a good pre-season test.
Posted by Keeping Stock at 6:40 AM

A good game.
West Ham good in the first 2 thirds of the ground, but lacking a cutting edge in the attacking third.
Their big men, and they were big, did not monster the phoenix players as much as had feared.
skill levels were very good.
Their goal was well made.
The Phoenix were disciplined in defence. They kept a very tight defence and controlled the West Ham attack well.
They relied on the counter and used it well.
Glen Moss made a very good save at 9 minutes which gave the Phoenix some spirit.
both goals well taken

Nice review QH, but you missed the question that's one everyone's lips; did you observe Shirts Off at the 80 minute mark?

No, the ladies present would have been presented with too many temptations!
And it was rather cold...

Harden up man; you've been living the high life in Sandringham for too long! You've forgotten your Otago roots :)

I have been up here since 1985.
The blood has thinned somewhat, even with copious amounts of the antifreeze I consumed last evening.

Very well deserved win. Not a "smash and Grab" then park the bus kind of win either. They competed very well, played some good football and looked composed and well drilled.

While a "pre season friendly" for West Ham it should not be forgotten that Winston Reid alone probably earns more in a week than 2/3rds of the Nix squad earn in a year!

Albert Riera is immense. Means more to the Nix and how they play than Richie McCaw does to the AB's. Young Alejandro Gorrin looks a very good pick up and if the McGlinchey saga ever gets sorted that is the core of a very good midfield.

Bring On Saturday! I can not wait!